You know, there is one thing that came out of this whole weird little bubble world the “plague panic” has caused, and that is the return of the popularity drive-In movie.

Adult moviegoers have been taking full advantage of the remaining drive-in theaters in the country and the retro feel of being able to watch a movie from your car, and of piling your “safely isolated” ten friends in the back of a pickup with lawn chairs, a take-out pizza, a big massive trash bag of pop corn and a cooler of (wink) Coca-Colas.

It is also a great experience for families. One of my favorite memories as a kid was going to see the Poseidon Adventure at the Fiesta Drive-In in my jammies sitting in the back of my dad’s ’66 Mustang. I remember a small pang of jealously towards my brother, who got to dress as a cowboy for the show (it was Western Day at his school). I also recall falling asleep on the way home and dreaming about smashing through the glass ceiling of a big ship. (RELATED: Fear, Panic and Paranoia at the Movies)

The Fiesta Drive-In El Paso had one of the best neon signs I had ever seen on the back of the main screen (at least when you’re three it was impressive. The sign faced the main road, with a folklorico dancing couple, complete with a man in a giant sombrero, and a woman in a big swoopy skirt. And it moved! I loved passing the big sign on the way to one of my parents’ favorite family restaurants, and seeing the big couple continuously kicking their heels to an endless, glowing colorful dance step.

Skip ahead ten years and the drive-ins were on their way out. The beautiful neon of the Fiesta was torn down and painted over, as the Fiesta soon became an “adult cinema.” Unfortunately for my parents, we still had to pass it on the way to their restaurant, and they had to endure the embarrassment of my brother and I screaming out the names of the movies on the marquee and laughing like idiots at the implications:

“Blazing Zippers! Must be a western!”

Eventually, with more zoning and residential areas popping up, the drive-in moved to a site outside of the city limits before fading out all together.

There was a cool or “retro” drive-in when I went to college, and that was party place on Saturday nights, but I hadn’t been to a drive-in in at least 25 years before this spring’s “social distancing” madness.

Now, pop-up drive-ins are all the craze. Cities are setting up makeshifts drive-in screens on the roofs of parking garages, on the sides of event arenas, and in airport hangars, to name a few of the places I have seen being used. This is a cool thing.

It is sad it had to take something like a worldwide pandemic to bring this great part of Americana back in vogue, but if that’s what it took, take advantage of it.

There are some other things that would be cool to see return as well, because when people get bored, they can get innovative, and I appreciate that.

In Italy, for example, the old “wine windows” are being use again. The wine window looks like a little hole in the side of the building, sometimes shuttered off when not in use. They are found in some of the historic, centuries-old buildings in Florence, were around as far back as the 1500s when (according to Atlas Obscura), wealthy families could sell wine directly from their homes to avoid taxes.

Now, these little portals are getting some use again, not just for wine, but other items like pastries or gelatos. We need to bring those little portals over here to the states, and get that tradition going as well. 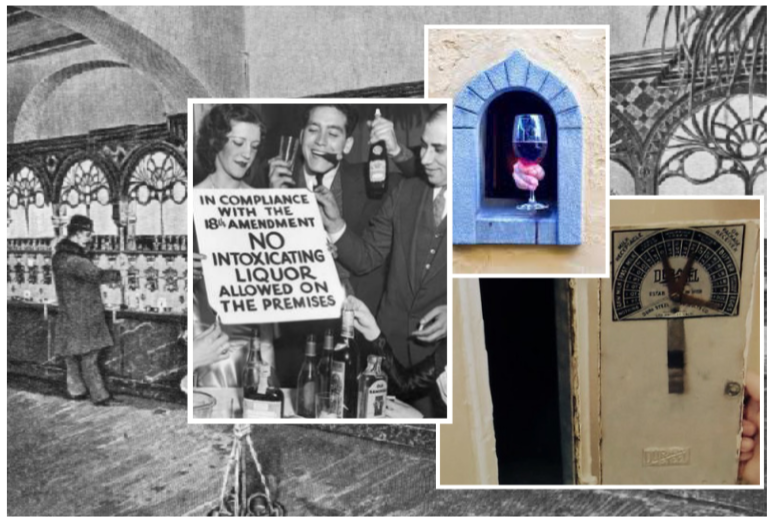 If we’re going to dream, dream big, so let me suggest three other things that could emerge during this pandemic and hang around only after it is no longer taking over the planet.

Automats: The automat started in Germany, but in the United States these nifty serve-yourself eateries where people could get a full meal vending machine style were popular through the first half of the twentieth century until they begin getting phased out by fast food places. There are still a few around here and there (even some new ones) more of a novelty than anything, but I love the idea.

I want these back everywhere with a dress code that men have to wear jaunty fedoras and suits again like Cary Grant or Humphrey Bogart. Women will all look like Peggy Carter, and the world will once again be classy and sleek. (RELATED: Four Characters Influenced by ‘The Shadow’)

Milkmen doors: I first saw one of these things when a friend of mine moved into an older home in our neighborhood. This home had a little “milk delivery door” in the wall of the kitchen. In this door was a little dial that let the families show the milkmen how much milk, butter, cream, etc. they wanted left. They’d leave the money in the little wall portal with their “order” and the milkmen would leave what they needed.

How awesome is that? There are plenty of food-delivery services at the home, but the idea of a little magic portal for a specific food staple just makes me think of a simple, more trusting time that was long before my own existence.

Speakeasys: The prohibition era speakeasy, the hidden era drinking establishments that raised a big middle finger to those who only “had our safety and well-being in mind” by flat out making alcohol illegal. The result: home-grown businesses like booze bootleggers (which helped birth NASCAR, by the way), and the secret, exclusive, party which was the speakeasy club. Yes, we knew the dangers of over consumption, but adults can take responsibility for their own actions, which can come with risks.

Honestly, with so many little watering holes being held up to ridiculous regulations, as well as not even being allowed to open, I don’t know why these aren’t thriving everywhere. It could be another reason to dress like the 1920s again, walk up to a discrete little window, and utter, “Rona sent me,” for entrance. Open these and I’m visiting…along with several other people. Masks optional!

There haven’t been too many good side effects of this spring and summer’s quarantine fest, but the return of the drive-in and other innovative mixes of capitalism and necessity will continue long after it is over…whenever that may be.